Blue is the Warmest Color, winner of the Cannes 2013 Palme d’Or is a controversy lesbian film became  the subject of a lot of debates that not only limited as a film but also extended its influence in real life and the art of cinema itself . 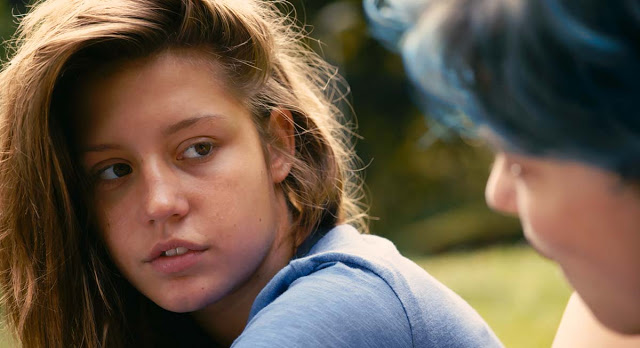 Although not divided  clearly , the film still feels like two separated chapters of Adele’s life : Chapter one is about two women falling in love and chapter two is about how they nurture that love .Emma’s rebellious hair grows out on chapter two as a sign that the nature of her  relationship with Emma  is changing . The frames no longer too attached to faces , the film paces becomes so much slower and outspread , lack of links compared to chapter one . However, it brings the fullness to every single notes of this lesbian relationship: Odd , exciting , passionate , false and remorse  . Eventually , it’s all too late , that’s Adele’s first love .After a long time , Emma gets more matured . Her paintings turn from blue to red. She’s incapable of getting back to Adele because her maturity doesn’t allow her to break the commitment with Elise .

It’s a connecting story about the journey of a teenage girl finding and accepting herself . There are faults , impulses and despair . Finally, the film ends with sadness but at least , Adele figures out what she needs . She doesn’t need to talk more to the guy or flirt  with him  at the end of the film . She doesn’t need the chance to go home with somebody . Not that she’s lonely although it’s one of the reason she lost her love .